1. Aspects to be recorded

A usage event takes place when a user downloads a document which is managed in an institutional repository, or when a user view the metadata that is associated with this document, see also figure 1. 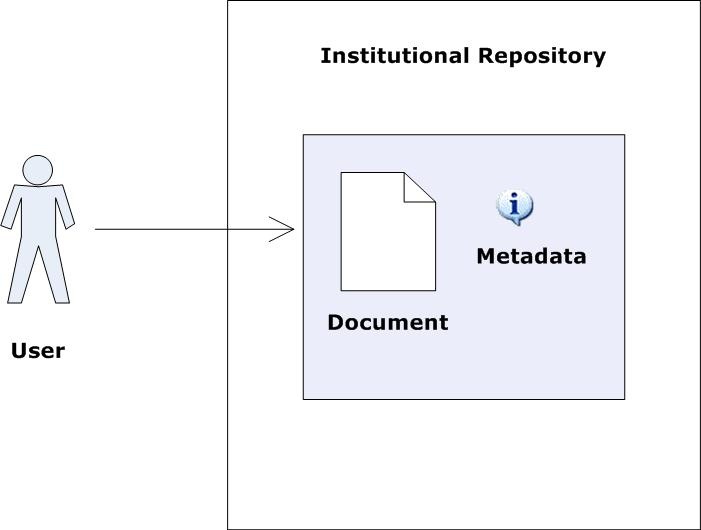 The user may have arrived at this document through the mediation of a referrer. This is typically a search engine, such as Google or Yahoo.

The aim of the SURFShare SURE project is to describe the highlighted entities that are involved in the usage event as fully as possible. The event took place in a certain country, at a certain time on a certain date, and from a machine which a certain IP-address. In the JISC Usage Statistics Review,[1|http://www.surffoundation.nl/#_ftn1] which was released in September 2008, it is stipulated that the following items of information must minimally be captured:

In line with these JISC recommendations, it has been decided in the SURF SURE project to provide the following data elements:

All Dutch repositories make use of Apache server software for the maintenance of their repository websites. Each usage event that takes place generates an entry in the Apache logging files. These logging files will be used in the SURF SURE project as the primary source of information for usage statistics.

Figure 2 below contains a typical entry from an Apache log file.

From figure 2, it can be seen that the aspects which were mentioned at the end of section 2 can normally be derived relatively easy from the log file.

Different institutions may also have configured the logging facilities of their servers in different ways. Because of this, there may occasionally be variations in way in which, for instance, the time and the date are formatted. To avoid problems arising from variations in formatting, this section provides guidelines on the format in which the mandatory and optional data element need to be provided. A general principle, however, is that information should be passed along to the central database as 'pure' as possible, so that analysis can take place centrally and consistently.

In compliance with the JISC Usage Statistics Review, individual usage events need to be serialized in XML using the syntax that is specified in the OpenURL Context Objects schema.[3|http://www.surffoundation.nl/#_ftn3] This section will describe a recommended practice for the use of this schema.

The root element of the XML-document must be <context-objects>. It must contain a reference to the official schema and declare two namespaces: xmlns:ctx="info:ofi/fmt:xml:xsd:ctx" and xmlns:dcterms=http://dublincore.org/documents/2008/01/14/dcmi-terms/.

Each usage event must be described in a separate <context-object> element, which must appear as a direct child of <context-objects>. Two attributes must be used:

Within <contextobject>, a number of elements can be used which describe the context of the usage event. The names of these elements are as follows:

Information about these contextual entities can be given in four different ways. Firstly, they can be characterised using an <identifier>. Secondly, metadata can be included literally by wrapping these into the file using a <metadata-by-val> element. Thirdly, a reference to metadata stored elsewhere can be included by using <metadata-by-ref>. A fourth method is the use of the element <private-data>. In the SURE Statistics project, only the first two methods shall be used. Listing 1 is an example of a full OpenURL Context Object document.

SURFshare use of Usage Statistics Exchange