The filter is implemented at the repository and is meant for reducing traffic by 80%. This list is basic and simple, and is not meant to filter out false-positives. Heuristics analysis according to a transparent algorithm is NOT done by the repositories, but done at the central server in a later phase. Centralised heuristics will reduce the the debate on reliability.

Definition of  a "robot"

This section tells us: "when do we classify a webagent as a robot?"

A small note about behaviour analysis with heuristics:

Heuristics analysis should folow according to a transparent algorithm, and is NOT done by the repositories. Heuristics might be done at the central server in a later phase then Usage statistics has matured more. Centralised heuristics will reduce the the debate on reliability.

Definition of  a "robot"

This section tells us: "when do we classify a webagent as a robot?"

If a single user clicks repeatedly on the same document within a given amount of time, this should be counted as a single request. This measure is needed to minimise the impact of conscious falsification by authors. There appears to be some difference as regards the time-frame of double clicks. The table below provides an overview of the various timeframes that have been suggested.

The data format is in OpenURL context objects. In the KE Usage Statistics Guidelines we make a distinction between the CORE set and EXTENSIONS.

The CORE set is a requirement to setup a reliable Statistics service.

the Extensions are extra, and are more likely specific for projects and their user inter face and their specific user demands. These extensions are optional to implemet, but are shown here to infor the statistics community what information they might miss or not able to distinguish on the long run.

CORE Use of OpenURL Context Objects

To be able to compare usage data from different repositories, the data needs to be available in a uniform format. An agreement need to be reached, firstly, on which aspects of the usage event need to be recorded. In addition, guidelines need to be developed for the format in which this information can be expressed. Following recommendations from MESUR and the JISC Usage Statistics Project, it will be stipulated that usage events need to be serialized in XML using the data format that is specified in the OpenURL Context Objects schema. The XML Schema for XML Context Objects can be accessed at http://www.openurl.info/registry/docs/info:ofi/fmt:xml:xsd:ctxThe OpenURL Framework Initiative recommends that each community that adopts the OpenURL Context Objects Schema should define its application profile. Such a profile must consist of specifications for the use of namespaces, character encodings, serialisation, constraint languages, formats, metadata formats, and transport protocols. This section will attempt to provide such a profile, based on the experiences from the projects NEEO, SURE and OA-Statistics.
The root element of the XML-document must be <context-objects>. It must contain a reference to the official schema and declare three namespaces:

Occurrences of child elements in <context-object>

The <referent> element must provide information on the document that is requested. More specifically, it must record the following data elements.

The <ReferringEntity> provides information ion the environment that has forwarded the user to the document that was requested. This referrer can be identified in two ways.

The user who has sent the request for the file is identified in the <Requester> element.

EXTENDED Use of OpenURL Context Objects

OpenAIRE might add additional data for for example "Projects".

PIRUS Scenario B: with OAI-PMH

PIRUS Scenario B: with SUSHI

OAI-PMH is a relatively light-weight protocol which does not allow for a bidirectional traffic. If a more reliable error-handling is required, the Standardised Usage Statistics Harvesting Initiative (SUSHI) must be used. SUSHI http://www.niso.org/schemas/sushi/was developed by NISO (National Information Standards Organization) in cooperation with COUNTER. This document assumes that the communication between the aggregator and the usage data provider takes place as is explained in figure 1. 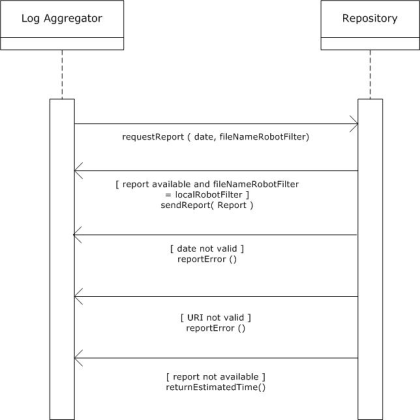 Image Added Figure 1. The interaction commences when the log aggregator sends a request for a report about the daily usage of a certain repository. Two parameters must be sent as part of this request: (1) the date of the report and (2) the file name of the most recent robot filter. The filename that is mentioned in this request will be compared to the local filename. Four possible responses can be returned by the repository.

In SUSHI version 1.0., the following information must be sent along with each request:

This request will active a special tool that can inspect the server logging and that can return the requested data. These data are transferred as OpenURL Context Object log entries, as part of a SUSHI response.
The reponse must repeat all the information from the request, and provide the requested report as XML payload
The usage data are subsequently stored in a central database. External parties can obtain information about the contents of this central database through specially developed web services. The log harvester must ultimately expose these data in the form of COUNTER-compliant reports.
Listing 2 is an example of a SUSHI request, sent from the log aggregator to a repository.

Note that the intent of the SUSHI request above is to see all the usage events that have occurred on 21 December 2009. The SUSHI schema was originally developed for the exhchange of COUNTER-compliant reports. In the documentation of the SUSHI XML schema, it is explained that COUNTER usage is only reported at the month level. In SURE, only daily reports can be provided. Therefore, it will be assumed that the implied time on the date that is mentioned is 0:00. The request in the example that is given thus involves all the usage events that have occurred in between 2009-12-21T00:00:00 and 2002-12-22T00:00:00.
As explained previously, the repository can respond in four different ways. If the parameters of the request are valid, and if the requested report is available, the OpenURL ContextObjects will be sent immediately. The Open URL Context Objects will be wrapped into element <Report>, as can be seen in listing 3.

When the repository is in the course of producing the requested report, a response will be sent that is very similar to listing 6. The estimated time of completion will be provided in the <Data> element. According to the documentation of the SUSHI XML schema, this element may be used for any other optional data.

Appendix A: comparison of the use of OpenURL Context Objects